Download my Norwegian voiceover demos here. In this shared google drive folder you will find the following files:

01 – Montage (same as above) – A quick compilation of promos, commercials, continuity, corporate reads and characters from my London-days, ending with a little bit of English with an exaggerated Scandinavian accent.

The rest, all pure voice without backing, have been recently recorded in my new studio in Mexico:

07 – Kids’ audiobook read in English with a soft Scandinavian accent

If you live in Norway I can almost guarantee that you’ve heard my voice.

I worked non-stop with voiceovers in London and Los Angeles for seven years (mostly in Norwegian but sometimes in English), and even while travelling around the world I was able to continue working by booking myself into studios wherever I happened to be or by recording myself on my own recording equipment (or, twice, being flown back to London!). I am now, in 2017, again available for voice work in my own studio.

I have a very wide range of experience, covering most types of work – commercials, audio books, live TV continuity (for three years I was the “voice of TV3”), promos (promo voice for Cartoon Network / Jetix / Disney Channel for years), radio, corporate and institutional reads, dubbing, characters, telephony, I narrated the documentary “Hitler’s Sunken Secret” for NOVA and did comedy with Dom Joly on Trigger Happy TV… and I even come built into some luxury cars in Norway as the voice of the GPS. 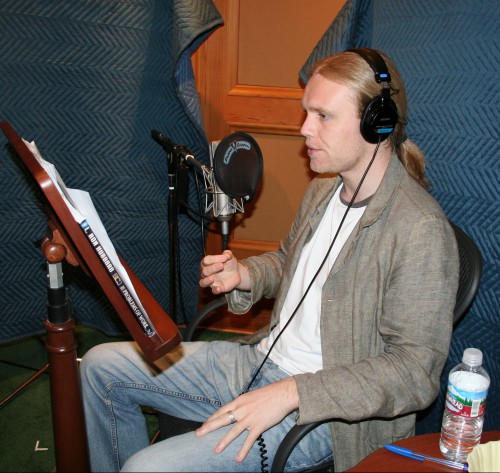 My voice has an unusual clarity and fearless authority and, being a trained actor, my diction is perfect. Very versatile, artistic and intelligent, I range from natural, soft, warm and easy-to-listen-to, but I can just as well rumble like an earthquake or hard-sell louder than a jet engine.

Having run my own professional voiceover studio in London for six years, I have plenty of experience in producing and engineering all aspects of a project. At TV3 I also filled the role of a Network Controller, having editorial control of the channel in prime time, hence my attention to detail is impeccable.

I have meticulously reconstructed my voiceover studio (with a live room insulated with layers of wood, clay, plasterboard, styrofoam and foam) here in the mountains of Oaxaca in Mexico. I produce, voice and engineer perfectly professional recordings with my Neumann TLM103 microphone going through my Focusrite preamp into my Nuendo workstation. I can provide edited, processed and broadcast-ready audio files of any kind, or I can send raw recordings for clients to post-produce in their own studios.

I am available right now for all kinds of voicing work in Norwegian or mid-Atlantic English or British with a very slight Scandinavian or generalised European accent. Be aware of the massive differences in Norwegian dialects when hiring a Norwegian voice. I master “standard newsreader” Norwegian (bokmaal), as well as anything from a light touch to a thick-as-brick Oslo accent. Compare, in British English, to “RP”, “London” and “Cockney”. RP with a touch of London could be said to be in the trendy middle-ground where correctness and clarity is preserved without losing a familiarity with ordinary people – my natural “RP Norwegian” with a touch of Oslo does much the same thing and ensures that your script is as widely understood as possible both geographically and socially throughout Norway.

I advise you to not give me projects with very tight deadlines as a slight communication delay is likely; expect a turn-around time from first contact of about three days, depending on the length and complexity of the project.

Contact me: martinvoll at gmail dot com. Thank you.