I was lucky enough to have a private piano teacher for almost ten years from the age of seven. I played many local concerts and sometimes with orchestras. Although developing into a disinterested teenager, the piano taught me sufficiently to give me a base in music that would open up many other doors later in life.

My brother played the guitar as a kid which inspired me to pick it up sometimes and start learning. At secondary and high school I played the guitar and piano in the band Gurkene and we were pretty chuffed to have about ten seconds of our music, along with an interview, featured on the Norwegian youth programme Midt i Smørøyet on the state channel NRK.

At drama school in London I found a piano in every room and probably spent more time playing music than acting. The disinterested teenager has disappeared and I realised that I had the ability to express my own musicality through the piano. Many musical ideas started floating around without being fixed into anything permanent.

I also learned a lot about breathing and voice work and we had regular singing classes, which I enjoyed, but I didn’t have the confidence to consider myself “a singer”.

After drama school I worked as an actor but was happiest when I could mix it with music, such as being the musical director and piano player at the same time as having a modest acting part in the Greek tragedy M (based on Medea), touring around schools and odd places such as the British Museum. For Jon Fosse’s play A Summer’s Day I played the male lead but at the same time was able to compose and perform the music live.

I continued composing on the piano, for productions such as the short film Meli Melo and the TV doc Surviving the Arctic. I built a studio, mostly for voiceovers but also for my music. Having decided to leave London and start travelling, I knew I would have to record all these pieces for the piano from the various productions or they would be lost forever – the result was Sole Essence.

I started travelling with a camera, recording equipment and a mouth harp always hanging around my neck (the best way to learn an instrument, especially when waiting long hours by the side of the road for a ride!). I have learned from no one but developed my own mouth harp technique focussed on breath and tune (for many people the mouth harp is simply a rhythm instrument). My various mouth harp jams on the road, along with some studio recordings, will one day be released on the album The Mouth Harp Travels the World.

In Adelaide, Australia, a couchsurfer-friend gave me a harmonica and I learned how to play it later on in Melbourne – looking for a place to live for a couple of months, I walked everywhere around the city for a week to get to know it, playing my harmonica every step of the way…

On my journey I recorded an experimental piece of music with dozens of musicians from around the world. It still only has the working title Global Musical Collaboration and is still a work in progress.

In New Zealand I met the rainbow family, which is jokingly called “the biggest disorganisation of non-members in the world”. I’m not going into a big explanation of what the rainbow really is right now, but we basically come together for month-long gatherings in nature and music is a very important part of what happens at a gathering. There are instruments, musicians, music and jams all over the place all the time and it’s the best place to learn. The rainbow taught me about what music really is. We have become accustomed to “music” being a 3-minute rented clip on a digital streaming service. But music has such a hidden spiritual dimension that the modern world seems to have forgotten. As you can read in spiritual books from all traditions, there are many ways to open your heart, be in the moment, let go of the ego, connect with yourself and become one with everything, whatever you want to call it. Music is one of these ways. Music at rainbow can be one of the most profound and ego-less shared experiences you’ll ever be a part of. Being completely connected with 50 people around a fire in a huge teepee, everyone totally focussed on the co-creation of a surging wave of energy expressed through music, kind of beats MTV. To actually capture such an experience in a decent quality recording is something I’ve never really heard and perhaps it is impossible, but it is a motivation in my vision to build a Sound Temple here in Mexico. The mouth harp taught me rhythm and endless rainbow drum circles taught me some basics of drumming. 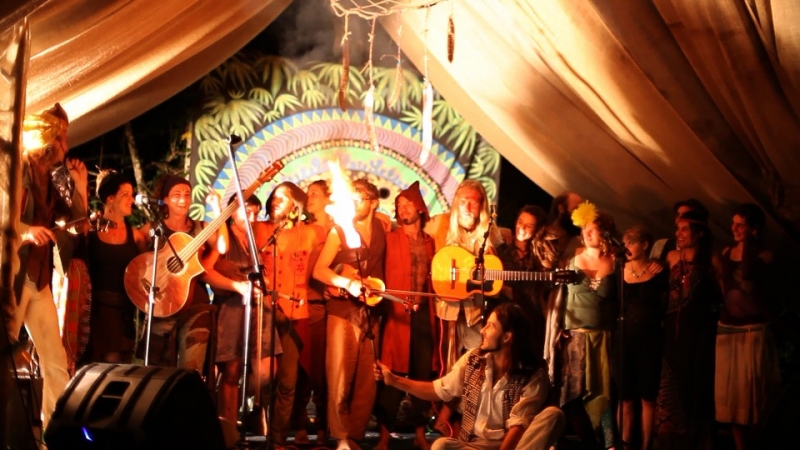 The horse caravan on stage at Terra Nova

In Brazil I joined a rainbow-style horse caravan which rode 1000km in about 8 months, making a living from the shows of music and circus we performed along the way, including on the main stage at the Terra Nova festival in Rio de Janeiro. Although far from being the best musician in the group, we needed someone to step up, play guitar and sing loudly to hold the songs together, and that turned out to be me on many of the songs. And that is how I discovered that I am a singer. I recorded most of our songs, which will become the Horse Caravan Soundtrack at some point in the future. 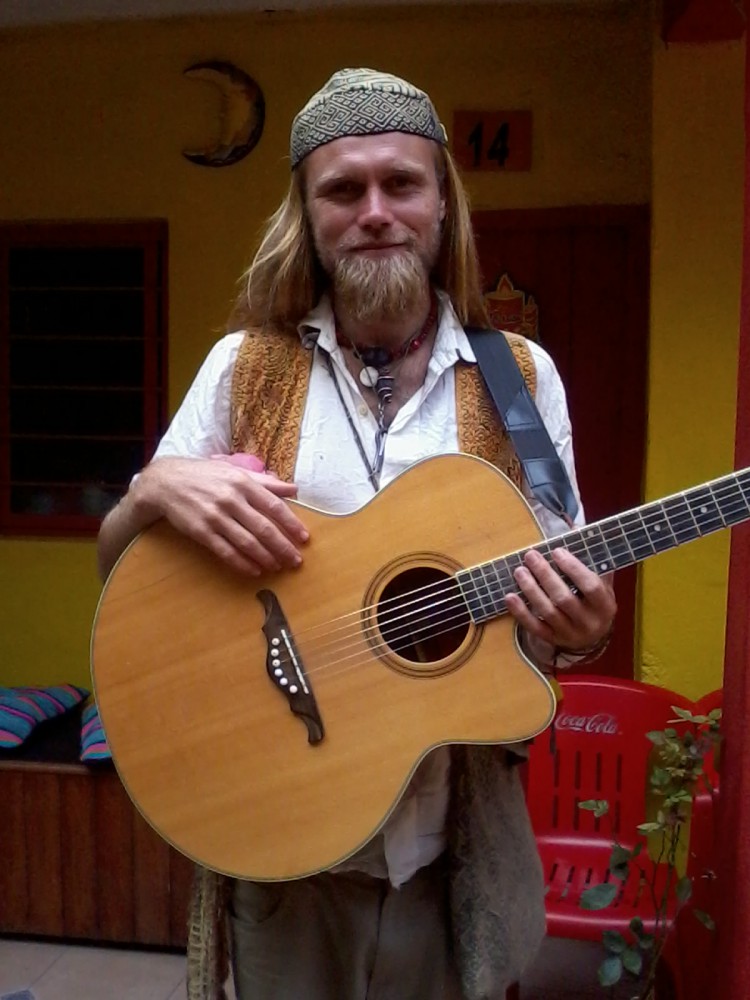 Me playing on the street in San Cristobal, Mexico

Running out of money is also a great way to learn music. You just have to get out there on the street and play your heart out in order to have breakfast. I spent my last money on my guitar in Brazil; my guitar-playing got better but obviously my skills at the piano suffered. Getting a melodica was fun but not exactly a replacement for a piano.

I was lucky enough to travel with some excellent musicians in the world rainbow caravan from Brazil to Mexico and I learned a lot about Latin and Gypsy music. We made a living from playing music in markets and squares and for charity at schools, hospitals, drugs rehabilitation centres, centres for street kids, on a big stage at a charity cancer event in Panama City and even in a professional circus in Peru. In the world rainbow caravan I started learning the accordion.

In the world rainbow caravan we also worked professionally as music therapists, and upon completion of my journey we did a music therapy tour of festivals in a dozen European countries in the summer of 2014.

After moving to Mexico our son Sylvan arrived and, overwhelmed by a wave of creativity, I recorded an album in his honour – Once Upon A Midsummer Night’s Dream.

In 2016 I recorded the album Norge På Langs (Norway Lengthwise) of Norwegian traditional music, the soundtrack for the film of the same name. However, almost two years later it still hasn’t been properly released – because I want to release it well! This means that I want to create a record label – Sylvan Sound – in order to put my own music into the context of similar music from similar artists before going for a full-blown all-digital release to every corner of the internet. At the time of writing, August 2018, I’d say the release is less than a month away, inshallah…

I am making many interesting musical connections here in the mountains and we are forming a collective of infinite musical configurations, such as the bands We Are Juan and Salvajes. The latter are going on an album-release tour of the mountains and Oaxaca City towards the end of 2018.

I am looking forward to a future filled with music. The building of a Sound Temple will one day give me a place to work seriously and a way to offer my service to the wider community, along with the “Recording Retreat” which I believe is a completely new concept. Stay tuned!

One thought on “Music”